Uptime, Downtime, and Runtime Error In A Glance

Many times in the computer industry, we come across terms such as Uptime and Downtime, Runtime and Runtime error, etc. besides that here, we will look at what they mean and everything related to them.

You Can Check Our Dedicated Server Services

The term Uptime refers to the time period during which a computer is running or is operational. It is a standard of measurement and is done so in terms of a percentile. The standard is 99.999 percentile also called five 9s.

Downtime is the time period for which the computer is unavailable or non-operational. It is also called the outage duration. The unavailability of the system or network may be due to any system failures (unplanned event) which may occur from some kind of a software crash or from communication failures (network outages). Maintenance routines (these are planned events) can also lead to the unavailability of the system and thereby causing Downtime.

Uptime and Downtime are not only critical for determining the success level of the real-time services or systems. but also these terms help us quantify the success value of these services or systems. Generally, every service level agreements and contracts include an uptime/downtime ratio that shows how long that service will be operational and available to the users.

In the IT sector, professionals use these terms to refer to a total amount of operational time (for example if a system has been running constantly for three weeks it is said to have a “three-week uptime”).

In general, uptime is always referred to as a default or standard, whereas; downtime often requires specifics like maintenance downtime, downtime due to malfunctions, etc

Let us consider a website was monitored for 24 hours (= 86400 seconds). This is our timeframe.

Now in this timeframe say, the monitor was down for about 10 minutes (=600 seconds).

Now we subtract the downtime percentage from 100% to get the required quantity. 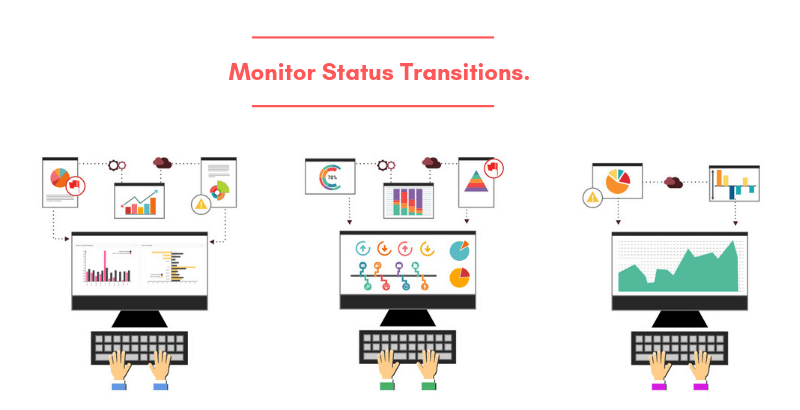 There are different monitor statuses like OK, Confirmed Error and Unconfirmed Error. Sometimes it is confusing because you cannot understand what to call the time between two such statuses: up or down. However, it is quite simple. Here, we will go through an overview of these status transitions and what they mean.

This status transition is considered UP. This is because the error is unconfirmed and we are not sure if there has been an actual error; In order to get more information about the error a double-click needs to be performed.

This transition is DOWN, as the error is now confirmed.

This transition is also considered to be down, as the monitor is still in an error state and will remain so until an OK indication is detected.

This is also down. A monitor is considered to be UP only after the OK indicator is detected.

This status transition like the first one is also considered to be UP. As before, here also, we are not clear if an actual error has occurred or not and need to double-click to know in detail.

Here, we will be looking at what affects the Uptime and Downtime % of a web server rather than a system. Keep in mind the terms are the same in case of a web server as well

There are four major factors: hardware, software, configuration, and strategy.

The software has similar effects on server performance. Some of these are:

These are the basic areas of software affecting uptime.

These are the basic configuration areas affecting server uptime.

This is the most critical aspect that affects server uptime. Having a solid strategy.

These four are the primary factors in this case and focusing on them will keep the systems running smoothly and affect uptime drastically.

The following are the most common causes that lead to server Downtime: 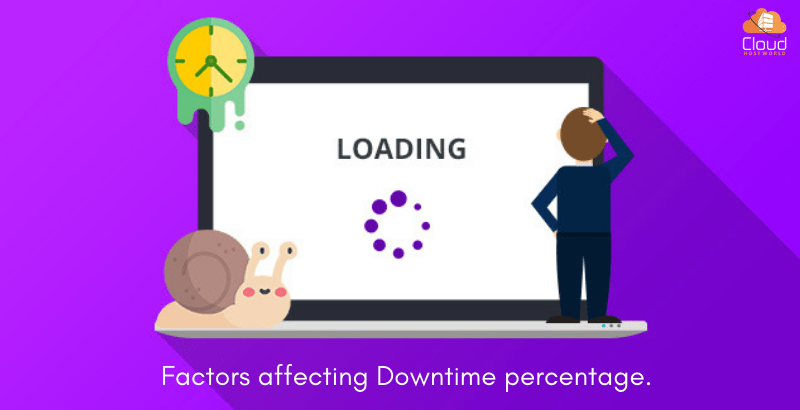 Hardware means types of equipment that we use to run the servers; simply put it means the computers we use and just like everything else, they degrade over time. Neglecting this equipment, (storage drives, CPUs, memory and motherboards) will lead to erroneous functionality. Power outages directly lead to hardware failures until you have an auxiliary power source to back you up.

There are various reasons for software failure on a server, from issues in the OS, bugs in the logics, system overloads and much more. Thus, keep your software upgraded and secured.

As interactions between clients and servers are done manually, Incorrect input during critical operations, a poor configuration of servers, etc. all lead to downtime on a server.

Runtime means the time taken to execute a program. and error takes place then it is known as a Runtime Error. Unlike compilation errors that happen during program compilation, a runtime error occurs only during the execution of a program.

Runtime error notifications usually appear in a message box showing a specific error code that contains the nature of the error. It is very common for the system to slow down considerably prior to a runtime error.

The software first performs a self-diagnosis and when it seems that it cannot proceed any further it generates the error. There are various reasons that lead to such errors. Some of them are:

This is a very common cause of runtime error. A poorly written program will always give a runtime error. It is very likely that such a program will generate a compilation error and even if the engineer somehow manages to compile it a runtime error is inevitable. The only solution to this is to write a robust and flawless program in the first place.

Sometimes when an engineer loads his/her software with memory leaks or if the system he/she uses has bad memory storage a runtime error generation is very likely. There is no solution as the software itself is flawed and as for the system memory issue, the only way out is to increase the memory capacity (if possible).

In case of a shared environment like in Windows, if a rouge application pokes into your area of work, there is a high probability for a runtime error. In such cases, you can shut down all other applications and software and see if the software that generated the error still does so.

Last but not the least computer viruses and/or malicious ad wares; they are a major reason for a lot more than just runtime errors. These programs also run in the background and remain undetected. Although they do not directly cause a runtime error but can affect your software, which may lead to one.

The only solution to these is getting rid of them. It is very essential to scan your system for them with some kind of antivirus software on a daily basis and whenever you find one do not hesitate to ‘kill’ it.

The only solution to these is getting rid of them. It is very essential to scan your system for them with some kind of antivirus software on a daily basis and whenever you find one do not hesitate to ‘kill’ it.

We have seen what is uptime and what is downtime. and how to calculate them. We have also seen what factors can affect server uptime and downtime and how to solve any issues regarding them. Now you know what these terms mean and how to deal with them.

Why Would You Need Managed Dedicated Servers?

Trends in Web Hosting That You Must Know About In 2018